Sphyrapicus nuchalis
Piciformes
Most birds in this group are adapted for climbing and perching in trees and range widely in size. The feet of most species have two toes pointing forward and two pointing back, a special adaptation for trunk-climbing known as a zygodactyl arrangement. The order includes families as diverse as the puffbirds and the toucans, but only the woodpecker family is found in Washington:
Picidae
Woodpeckers have many adaptations that allow them to perch upright against tree trunks and feed on insects under the bark or within the wood of the tree itself. Further specialization has produced many aberrant forms with different behavior and feeding habits. Most use their strong claws and stiff tail feathers to brace themselves against tree trunks as they climb. The specially adapted skulls of woodpeckers allow them to pound hard on tree trunks to excavate nesting and roosting cavities, to find food, and to communicate and attract mates. A special arrangement of bones and elastic tissues allows woodpeckers to extend their long tongues and extract insect prey from the holes they chisel with their strong, sharp beaks. The principal food of most woodpeckers is insects, especially the larvae of wood-boring beetles. A few woodpeckers feed on ants, nuts, or flying insects. Many also take a small amount of fruit. Most woodpeckers have rounded wings and an undulating flight pattern. The plumage of most is some combination of black and white, though brown is not uncommon. Many, especially males, have small patches of red or yellow on their heads. Although they may appear to damage trees, woodpeckers are generally good for tree health because they feed so heavily on wood-boring beetles. Most woodpecker species are monogamous, and many form long-term pair bonds. The nests are usually lined with nothing but the woodchips created by excavating the nest cavity, which is excavated by both members of the pair. Both sexes incubate the eggs, with males generally taking the night shift. Both sexes also feed and tend the young.
Fairly common summer resident east. Rare west
Source of Bird Audio

Red-naped Sapsuckers are black and white birds with yellow and red accents. Their upperparts are black barred with white, and they have a bold white stripe across each wing. They have yellowish bellies, black breast-bands, and red throats. Their heads are bright red with black stripes through and above the eyes. A bold white stripe crosses their faces above the base of the bill and continues down each side of their necks, becoming yellowish as it flows over the shoulder and onto the breast. Males and females look much alike, but females generally have less red on their throats and napes, which can vary from mostly red to mostly white. Juveniles are mottled brown but have white wing-stripes like adults.

Red-naped Sapsuckers are the most common sapsucker in deciduous and streamside forests, especially in and around aspen, cottonwood, and willow. They also breed in mixed coniferous forests and will use open- and closed-canopy forests, burns, and clear-cuts, if there are some remaining standing trees.

Sapsuckers get their name from their foraging strategy, which consists of drilling neat horizontal rows of holes in tree trunks and then returning to those holes later to feed on the running sap and the insects attracted to it. Unlike most woodpeckers, they forage in healthy trees and can actually kill a tree if they drill too many sap holes around its trunk, although this is quite uncommon. The persistent and conspicuous calls and drumming of Red-naped Sapsuckers are commonly heard in early spring.

Red-naped Sapsuckers are omnivores and feed on sap, insects, and fruits. During the nesting season they take more insects, and they feed insects to their young.

Red-naped sapsuckers form monogamous pairs. They typically nest in healthy aspen trees or dead conifers. Both members of the pair excavate the nest cavity. Nest trees are often reused, but a new nest cavity is excavated most years. The nest is lined with woodchips from the excavation but no other lining. Both members of the pair incubate the 5 to 6 eggs for 12 to 13 days. Both feed the young, which leave the nest after 25 to 29 days and are dependent on the parents for about 10 days more. Red-naped Sapsuckers typically raise a single brood each year.

One of the most strongly migratory woodpeckers, the Red-naped Sapsucker travels as far south as central Mexico for the winter.

Red-naped Sapsuckers are considered a keystone species, as many other species feed at the sap wells they drill. They were formerly lumped with Yellow-bellied Sapsuckers as one species, but were split off in 1985. The Breeding Bird Survey has identified a non-significant annual increase in Washington since 1966. In the Cascades, they sometimes hybridize with Red-breasted Sapsuckers. 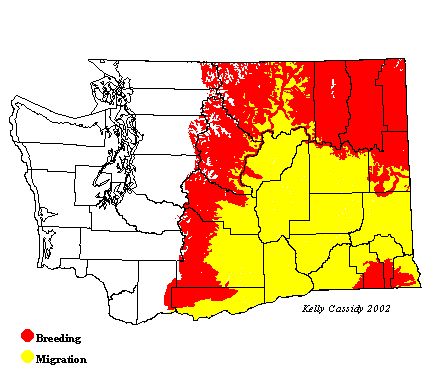