Perisoreus canadensis
Passeriformes
Members of this diverse group make up more than half of the bird species worldwide. Most are small. However their brains are relatively large and their learning abilities are greater than those of most other birds. Passerine birds are divided into two suborders, the suboscines and the oscines. Oscines are capable of more complex song, and are considered the true songbirds. In Washington, the tyrant flycatchers are the only suboscines; the remaining 27 families are oscines.
Corvidae
The crows, jays, and allies are intelligent and crafty birds. They are opportunistic, and most thrive living among humans. For this reason, many have been persecuted as pests. Many members of this family cache, or store, food for the winter, which allows them to be year-round residents at high altitudes and in northern climates. Many live in forests, and most nest in trees. Crows, ravens, magpies, and jays are generally long-lived and monogamous, and form long-term pair bonds. Some species have helpers at the nest. Their nests are typically bulky and made from sticks, and both sexes generally help build them. Females incubate the young, but there are exceptions where the male helps. Both sexes usually feed and care for the young. The corvids are omnivores, eating seeds, nuts, insects, carrion, and small vertebrates. They often rob the nests of other birds of eggs and nestlings. Most are social, forming flocks, especially outside the breeding season.
Fairly common resident.
Source of Bird Audio

Gray Jays are medium-sized, gray birds with lighter bellies. There are three populations of Gray Jay in Washington, although the two western populations look quite similar. The population in western Washington and the one in the Cascades both have black from above the eyes to the nape, a white face and forehead, and a white belly. Their gray backs have a brownish cast with fine, white streaks. The Gray Jay in the Blue Mountains and the northeastern corner of Washington has a solid gray back with no brown or streaks, and a black nape. The face, forehead, and neck are white, with a little gray at the top of the head. The belly is gray. Juveniles are dark gray with light gray mustaches. Eastern Washington juveniles have darker caps and lighter throats than western Washington juveniles.

Gray Jays are found primarily in mature, humid, sub-alpine, spruce forests. They do not generally breed below 2,000 feet, and are most often found from 3,000 feet and above to the tree line, although some are found nesting locally in lowland habitats.

Gray Jays are gregarious and are often found in family groups. They can be very bold and will beg from campers, follow hikers, and go inside cabins to steal food. These jays forage from perches and fly from tree to tree, scanning for food. They cache food during the summer and fall, using sticky saliva to paste it in bark crevices and other hidden spots, and they eat this stored food through the winter. Gray Jays often carry food with their feet in flight, which is unusual for songbirds.

Omnivores, Gray Jays eat a varied diet made up of seeds, berries, insects, and other invertebrates, fungi, small rodents, eggs and nestlings of other birds, carrion, and campground handouts.

Gray Jays are monogamous, and pairs stay together on their territories year round. They begin nesting in late winter; relying on the food they have cached to raise their young. They typically nest in a dense conifer tree, close to the trunk, usually within 15 feet of the ground. Both members of the pair help build the nest, which is a bulky cup of twigs, lichen, bark strips, and caterpillar webbing, lined with hair and feathers. The male brings food to the nest while the female incubates 2 to 5 eggs for about 18 days. The female broods the young for about four days, and then joins the male in feeding the young. The young leave the nest at 22 to 24 days, but stay with their parents for another 4 to 6 weeks. Recent studies have shown there to be a third, unrelated bird on the territory, helping throughout the nesting season.

Gray Jays do not undertake a regular migration, but sometimes move down-slope during winter.

Because Gray Jays live in fairly remote areas, their population status is not well known. They prefer unaltered forest, and populations generally decline after forests have been clear-cut. Caching food for the winter allows these birds to remain at high altitudes and in northern climates year round and allows them to begin their breeding season early.

Gray Jays can be found year round at high altitudes (above 3,000 feet) throughout Washington. They can be found locally down to sea level on the outer coast of the Olympic Peninsula and rarely at other spots in western Washington, such as Lewis and Clark State Park, southeast of Chehalis (Lewis County) and the Willapa Hills (Pacific County). They are very uncommon at Fort Lewis (Pierce County). 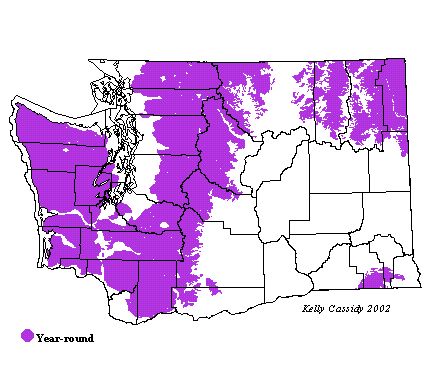