Falco mexicanus
Falconiformes
The hawks, eagles, falcons, and allies make up a group known as the diurnal raptors, because they are active during the day. Members of this group typically use their acute vision to catch live vertebrate prey with their strong feet and toes. They vary from medium-sized to large birds and most have an upright posture and strong, short, hooked bills. The New World vultures (not closely related to the Old World vultures) were once classified with the herons and allies, but they have provisionally been grouped with the diurnal raptors on the basis of recent genetic studies. Members of the order Falconiformes in Washington fall into three families:
Falconidae
This widespread and diverse family of predatory birds is divided into two groups. Some of the fastest-flying birds can be found in the falcon group. Built for speed, most falcons have pointed wings and long tails. Many catch avian prey in flight, but others prey on large insects, mammals, and ground-dwelling birds. Members of the caracara group are more opportunistic, taking carrion as well as live prey and often foraging on the ground. Regardless of the approach, members of this family almost always use their feet to catch prey. Like other birds of prey, females are larger than males. They are generally monogamous and form long-term pair bonds. Some caracaras build stick nests in trees, but most species in this family nest on cliffs, in other birds' nests, or in cavities, and typically do not add any nesting material. The female generally incubates the eggs and broods the young, while the male brings food to the nest. Once the young no longer need to be brooded, both parents bring food. Extended parental care is the norm for this family, as it takes a relatively long time for the young to learn to hunt. In Washington, one species from this family belongs to the caracara group, while the others are true falcons.
Uncommon resident east. Rare west.
Source of Bird Audio

During the breeding season, Prairie Falcons inhabit dry, open areas with cliffs and bluffs for nesting. In late summer, many move to alpine and sub-alpine meadows. During winter, they can often be found in agricultural areas.

Prairie Falcons usually catch prey by flying low over the ground. They are very vocal during courtship and are often heard before they are seen.

Mammals, especially ground squirrels and rabbits, and ground-dwelling birds such as California Quails and Chukars, make up the majority of the Prairie Falcon's diet. In winter, Horned Larks and Western Meadowlarks become a significant source of prey.

Prairie Falcons generally do not breed until their second year. The breeding cycle of the Prairie Falcon coincides with the most productive period of the shrub-steppe season, when prey species are flourishing. Courtship lasts from late February to April, and they nest on basalt cliffs in recessed or otherwise protected spots. They sometimes use an old hawk or raven nest, but do not nest in trees and do not build their own nests. Instead, they position the 3 to 5 eggs in debris scraped from the nest ledge. The female performs most of the incubation, which lasts about 31 days. During the time the female is incubating the eggs, and for the first week or so after the chicks hatch, the male provides food. When the young are over a week old, the female broods them less than half the time, and helps to bring food. The young leave the nest at about 38 days, and the parents continue to feed them for 30 to 35 days after they fledge. Most birds have left the breeding grounds by late June.

Prairie Falcons shift habitats periodically throughout the year, and some may migrate long distances. In late summer, ground squirrels move underground to escape the dry, hot environment. Prairie Falcons, losing their major source of prey, leave the nesting grounds at this time and head to higher elevations, where snowmelt prolongs the growing season. In late fall, some birds return to the shrub-steppe, and many spend the winter in open fields and agricultural areas, taking advantage of the flocking birds that winter there. Some also move short distances south and east during the winter.

Habitat loss has limited both nest sites and foraging habitat throughout the range of the Prairie Falcon. The availability of cliffs for nesting, with adequate surrounding habitat, is a limiting factor for Prairie Falcons in Washington, and habitat loss is their most significant threat. Large-scale agricultural development, while it provides wintering habitat, reduces the suitability of the area for nesting. However, although numbers have declined in some developed areas, it appears that the current population is stable overall. Unfortunately, the shrub-steppe, where many Prairie Falcons nest, is one of the most endangered habitats in Washington, and this puts Prairie Falcons at risk. They are listed on both the Audubon~Washington watch list and the Washington Gap Analysis at-risk list.

Prairie Falcons are uncommon breeders in the shrub-steppe zone of eastern Washington, rarely moving up into the Okanogan and Methow Valleys. Look for them where there are basalt coulees with cliff faces for nesting. In summer, alpine meadows are a good place to find them. In winter, they are also uncommon in these areas, and are rare in western Washington farmlands. 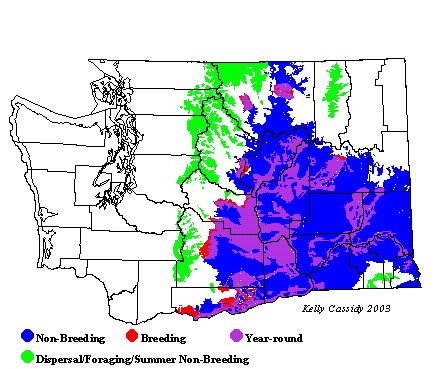